Night of the little birds is a game about an AH-6J Little Bird pilot completing his tasks including troop insertion, hostage rescue, search and destroy, convoy escorting, and cargo lifting.

It was an experimental project to make a 2D helicopter flight simulator. I wasn't very happy with the result, but I'm planning to make a more polished game with this game's concept.

The gameplay is similar to Choplifter, but controls are harder and more complicated for being 'Flight simulator'.

take on little bird helicopter and complete as many missions as you can for the highest score.

Night of the Little Birds.zip 5 MB

Casper The Ram Knight1 year ago

Awesome game,will you add more stuff to it? like more customization or even different littlebirds?
also what about a zombies mode

Thanks for playing, but I'm not working on this project anymore.

but I would make an improved version of it in the future.

Oh.
well,thanks anyway for making this game! i'm playing this game every day that i can lol,its pretty cool

Just passing by and thank you once again for your great helicopter games hoping that one day you'll make a helicopter coop game. I'm sure it will be devastating! BTW - you could make a bundle with all your games so it would be easier to get all them in collection and support you.

I'm currently learning lua and making helicopter mods for ravenfield, making many unique and realistic features. I think it would be a good place to get familar with unity and lua.

BTW is there some ending in the game? I've tried to complete mission 10 but it seems that it's infinite.

Yes, There's no ending as it's just a prototype.

Also lift system works not very convenient. Especially with mission delivery cargos. I'd say it's better to make a cable a little longer at default and then make it a little shorter when you take the cargo to make it less possible to crush the cargo when you take it.

I also think that parachute system should be redone. For now I fail it in 9 out of 10 cases. ^_^ I think parachute should work either automatically with a little delay (let's say 0.2-0.5 seconds) or at least should be also activated by pressing E again. There is also can be a system for preventing accident leaving helicopter while it flies (player should tap E button twice in a short period like 1 second or hold E for 0.5 second). I couldn't imagine I need it but that happened with me several times. ^_^'

to lift, you have to press X  and slowly approach to the cargo. If you slowly decrease the altitude and immediately go up after the cargo linked you can life it safely.

Parachuting is dead simple, just press E and  press S when you are falling (parachete can't be opened if you are going up, so press S several times until it opens.) use it. you don't need a complicated command.

Well the thing is it's not always possible to approach slowly to the cargo. Sometimes enemies just don't give this opportunity. As for parachuting - well I know how to do it but during action it's easy to forget right button or press wrong button. It would be more convenient just to press E again in the air to open parachute.

You've made it again... A great game about helicopter in less than month! It seems I found a bug though. When you pause the game and then unpause it - your status bar disappears.

This game was actually made in 2019 but I forgot to uplaod it on itch.io for a year.

Anyway thanks for reporting bug.

Only problem I'm having is with XBox controller - I can't define commands to the thumbsticks. In an earlier build this wasn't too much problem as the up/down/left/right was also mapped to the left stick but now it's split the left/right and up/down between the two thumbsticks which I'm a lot less keen on.

I changed control method because of someone's suggestion, maybe I shoud revert it.

I couldn't find a way to make Thumbsticks configureable because they are not considered to be button inputs unlike other buttons.

I don't fancy denying someone else their preferred config just to get mine back, maybe give players an option to have control of the helicopter on one thumbstick (left) as before or the new method using two thumbsticks? :)

I really like it, I've played a similar game when i was younger  and i allways wanted a bigger game like this, in fact i was making a similar game in GODOT.

Allthough there are two things that could use improvment.
In one of the tutorials it is said that i can rescue missing pilots, but in normal game i've never found one (they aren't implemented yet or am I blind). And the other thing is that instantly loosing controll after ejecting from my heli is very frustrating. Well not the fact that i loose it, but the fact that the enemy infantry is still shooting at me (Geneva convention morons, you can take me prisoner but not kill) and i can't defend myself. Very frustrating when there is like one guy left.

But other than that it is amazing. I've read that you are making a more polished version and i am definetly looking forward to playing it.

Glad you like it! The missing pilot appears from sky with parachute after completing certain days. (2 on very easy, 3 on easy, 4 on normal, 5 on hard) he is not displayed on radar and you must find him yourself, if you find and take him to base you can earn an extra pilot.

Enemies shooting you after losing control is definitely frustrating, I agree. I'll make a small patch so infantries won't attack you if you lost little bird. 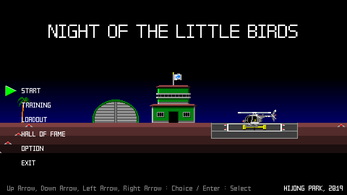 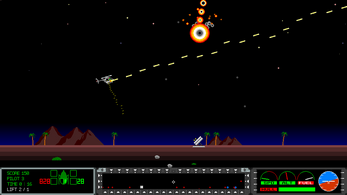 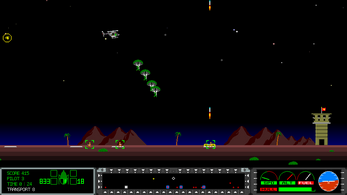 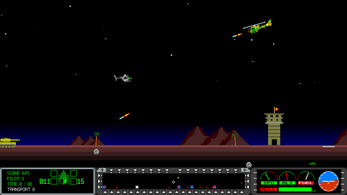 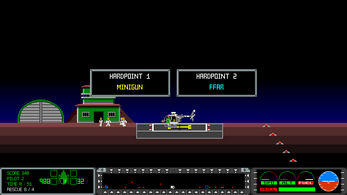