A downloadable shooter for Windows

The purpose of this project is to share how to make a defender style shooter with game maker : studio. If you want to make something like defender or seamless-wrap with Game maker : studio, Feel free to use it !

I won't care if you just slightly modify to make it as your game or port it to other devices. I actually want that happen because there are no so many defender clones today.

For anyone who are not interested at defender and want to try my basic defender clone, Here's the instruction:

OpenDefender is based on Atari2600 version of defender, which is considered to be one of the worst versions of defender.

The horrible flickers (Far worse than 2600 Pacman) and jerky controls drop the playability, and the game is way too easy mostly because of technical problems - Enemies are dumb and can only shoot one bullet at once, you become invinsible while shooting, you have only 5 humanoids to protect, and landers can only capture one humanoid. protecting is balanced by bad controls and uneven hit detection, but fighting with mutants isn't that hard too.

So, i wanted to make something that plays like atari2600 defender without technical problems.

In OpenDefender, you have 10 humanoids to protect, and landers can capture 3 humanoids at once. other enemies' AIs are closer to the arcade version as well.

Like the atari version, the stage is a city instead of mountains. so humanoids are always at the flat grounds instead of various mountains. This will prevent you from accidently shooting humanoids while fighting with enemies.

But If you lost all humanoids, The city will be on fire instead of being completely destroyed. I did it because a plain black background isn't so pleasant to look at.

The control is simple :
Spacebar to fire, Arrows to move.

When you are flying, pressing Spacebar fires laser. But if you hide under the buildings, Your lefted ships and smartbomb icon's color will be changed to red. Pressing Spacebar in this situation activates smartbomb and wipe out all the enemies in the screen. If you don't have any smartbombs, You can use Hyperspace instead.
There's no chance of death after using hyperspace, but you'll collide with enemies if you are not lucky.

Opendefender is obviously harder than Atari2600 version, but it's still a lot easier than arcade version. The controls are much easier, and i didn't made a very steep learning curve so you won't get frustrated easily.

If you are good at arcade version of defender, Getting high score in this game would be easy and you can modify it if you want harder difficulty.

Hello it's a great engine! I'm looking for something like that thinks a lot bro!
In my version of game maker studio 1, "Instance_destroy()" don't take argument. I would like to know if I remove the argument inside the instance_destroy() if the game will work?

Also, it will be hard to change the graphics bacause they are sweet! These kind of graphics are masterpiece for me! I'm thinking about the new graphics but similar to these!
thxt!!!!!

I fifure out the mistakes!

I'm glad you liked it, but note that i have uploaded version 2.

In this version i have fixed bunch of design errors related to mutant takeover and lander's spawning, and i added control changing feature with variable save feature as a bonus. I recommend to use version 2.

To fix the error about the instance_destroy(),

Because my game maker tell me that instance_destroy() does not take argument.

which version of game maker are you using ? Is that game maker studio 2 ?

okay, then i'll make the version 3 that fixed all instance_destroy events and added more comments so people can understand the codes better.

version 3 had been uploaded.

It fixed some codes and there are more latters to help you understanding it easier.

Also there are some gameplay tweaks to make it more faithful to the original game.

For example, killing pods with smartbomb also kills the swarmers in them and give more than 1000 scores. 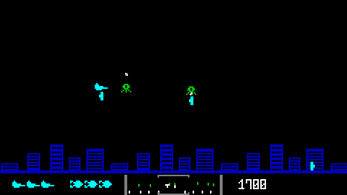 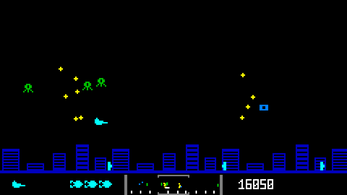 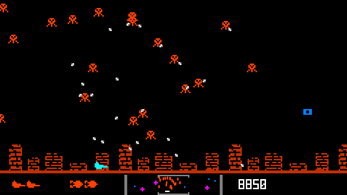